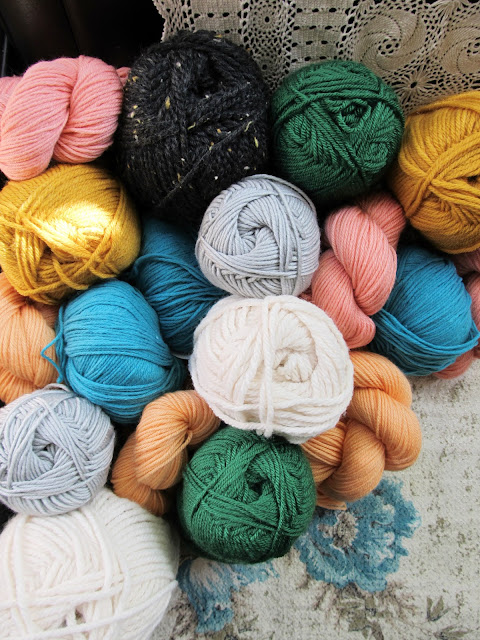 this whole post has been written with a song playing in my head, you know that little voice in your head that sings like a true singer, where to you, you sound like the bees knees. my little voice is singing "reunited and it feels so good, reunited cause you understood" it then goes on to make up a few words and then just go on repeating itself over and over.
this little singing voice of mine appeared last week, in the yarn aisle. choosing to spend my time wisely admiring balls of yarn rather than stand on the soccer sidelines in the cold, it just popped up from nowhere. it was inevitable i would find myself in this aisle as earlier in the day i had been hit by the nesting bug which always hits around this time of year, despite my protests. and with thoughts of nesting, comes thoughts of yarny blankets.
so i stood there channeling my inner Ingrid, i hoped some of her peachy talent for combining colours would rub off on me if i thought really really hard, but it was a tres sorry sight for yarny colours which stood before me in the 'chunky' section. oh woe is me i thought... i pottled around the corner, down another aisle, back again due to another yarny buyer not budging, quite obviously intent on her own project. down the next aisle and back around until i have frequented 3 aisles of double sided shelves of yarny goodness. my inner Ingrid found many peachy colours but alas and alack they were all in different weights. as i stood with despair in my crafty soul and my little singing voice going on and on, another little voice popped up. actually two. one from the other yarny buyer wishing to get past, and the other from another part of my little head...
first voice "excuse me please" to which i stepped aside.
second voice "surely Tif, if you combined several strands of the same yarn, you can make one chunky strand" to which i did a little jump (not a big one cause i had my clog boots on and i did not wish to land on the toes of the yarny buyer who was passing on by) and then i said a little 'eureka' to myself. i said this because i have always wished to find a moment worthy of such a word. i was never able to say this in science at school due to spending most of my science lessons sat outside the classroom in the corridor to stop the teacher weeping at my pants science skills in the labs.
so i went on my merry way, picking up sport weight (requiring three skeins to make a chunky strand), worsted weight (requiring two skeins to make a chunky strand) and just good old chunky (requiring one skein to make a chunky strand). then it dawned on me, not sure if this was another little voice or not, but the dawning made me note, yes this was a fine and dandy way to go about making chunky yarn for a blankie but it was also a very costly way. as i pondered, it appeared
buy yarn and save your sanity
do not buy yarn and go insane
i was left with little choice quite obviously i would be a fool to ignore the handcrafted gods and their words of wisdom...
on arrival home at the shed, i put my yarn in a little bundle so i may admire it, after which i fretted if my inner Ingrid had let me down, if the colour combination was tres terrible. i decided to not listen to my fretting ways and start my blankie. after a while, i put my yarn in a basket so my lads of two may admire it when passing by... noting not much admiring was going on, i gave up with the nicely positioned pretty yarn basket (fearing Little Olive would be most admiring) and proceeded with my blankie.
with the help of Dorothy (again where would i be without Dorothy) i am now busy beavering away on a ripply striped blankie.
perfectly sized for one who is wishing to nest alone, but could fit a little critter or small being in next to them quite snuggly if need be... and all the time as i beaver away spending quality time with Dr Hook and yarn, my little inner singing voice is keeping me company along with my sanity
she is noting already friday is hovering close by ~ Tif
Posted by dottie angel

Email ThisBlogThis!Share to TwitterShare to FacebookShare to Pinterest
Labels: knitting and crocheting, show and tell, the three C's

you've made me grin & giggle with your yarny spun tale...soothing as i can relate...thank you much for sharing! :)

I know is that you do NOT need an inner-Ingrid as your outer-Dottie is just perfick as she is ....

I used to keep my crochet project in the same exact tote basket! This makes me want to pull out all my leftover yarns and do something with them.

I am full of admiration and am beaming it over the ether at full strength. If you could crochet said lads an Ipod then they would admire (and no, I haven't missed out the word 'cover'), but it would have to be matt black and chrome which would be very boring on the colour front.

we are basket twinsies! i have the same olive green vintage basket that holds your yummy yarns! =D its my favorite!!! happy crocheting!

Your colors are playing quite nicely. Today I am crocheting too, under my quilt of loveliness. Such bliss!

That's going to be beautiful!

Love the colors that you finally decided on. A nice thick blanket such as this is perfect this time of year.

That does look a cosy blanket. I love your yarn choices, especially the peachy peach. :)
Vivienne x

This is why I opted for purchasing my chevron blankie from the senior center this year.
For it would have been a horrible discussion in my head at the yarn shop as well plus then feeling horrible every time I would walk by hook and yarn thinking I really should sit and start on you, knowing very well it would take me at least 3 years to find that kind of time :)
Your blankie is off to a beautiful start :)
Amy

Don't fret about your colour choices... It looks great!! I really want to learn to crochet and/or knit... Largely just so that I can have a decorative pile of wool balls =) x

Oh, those colors are wonderful!

oh very much obliged for the yarny nice comments :)

elizabeth, fear not, clogs are 'a coming'... i could not possibly fit all i have to say about the three C's into three days, so it will go on for a little while, as i am apt to do so about many things :)

beautiful combo! fyi....my lads of two wouldn't know a yarny project if it jumped up and cracked their noggins...unless there was food involved......

These colours are so beautiful! Love Love
Hello Sandwich
xoxo

...i really enjoy the mix of different yarns in all those beautiful colours...lovely pics :-)

I love this pattern. We have one in the same design, cream and baby blue. Made by my husband's grandmother. My husband was wrapped in it when he was a boy and now my newborn son is wrapped up in it. So special. I hope yours gets as much love as ours has.
http://kraftyguts.blogspot.com/