yesterday as i sat on the floor, Used Dog deep in slumber close by, Little Olive upon my lap chewing her bone and me 'a pondering and a plotting' my next crafty move, the word 'intermingle' popped into my little brain. 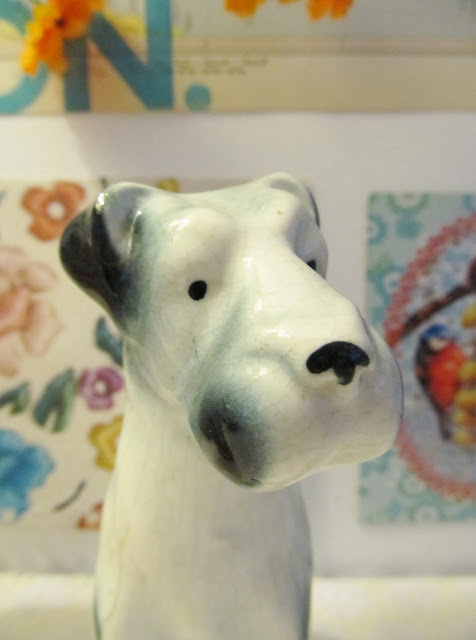 where it came from i have no idea, i have never used nor thought of this spiffy word before. after several moments of thinking about nothing but this new and exotic word i decided it must be a sign. a sign from the thrifty gods. yes yes, with no doubt at all, they were sending me a sign.
i realized in this one word 'intermingle' was a whole message, the message being
"Tif, go forth to the thrift store and intermingle with other thrifty souls"
i protested a little, i know perhaps that sounds very unlike me, but we have reached the time of year when for two whole months my thrift store is taken over by halloween and the need for every man and his dog to find a costume of such. thus resulting in much loved shelves and rows, once filled with spiffy secondhand goodness, now filled with crappity crap mass produced wares.
however, 'intermingle' would not let me be, all through homework, all through dinner, all through whatever else i was 'all throughing' (Mr Spell Checker isn't happy) 'intermingle' kept on calling my name.
so i had no choice, i could not lie in bed listening to this word the secondhand gods had sent as a sign. this would have been a terrible faux pas, for the gods may chose to never bless me again with their thrifting good luck.
upon entering my thriftstore door, i turned to the left as is always my way and that was the moment Hubert and i found each other. on the shelves of knick knacks, right by the door, all else faded away except for a white bright light highlighting Hubert and his little fleabitten soul.
on close inspection Hubert has been knocked around a bit, he does not wear his 46 years well. i know his age, not because he told me, for alas Hubert has not spoken in many a long time, but because someone at some point decided to write it on his derriere, of course they could have been making it up, but i like to believe he is quite the old boy. i noted his crazed and craggy fur, i noted his terribly broken leg, still showing the scars of a badly patched job... but most of all, i noted his dignified look as i gazed into his little black eyes 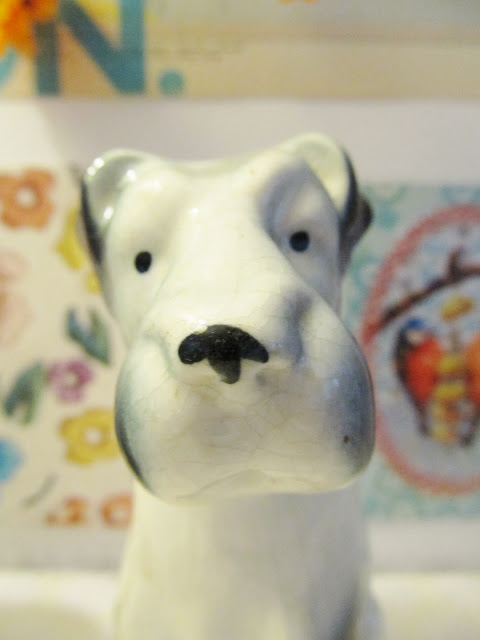 when Hubert and i returned home to a dark and quiet shed, such is my life living with 'lads of three' who are out and about most evenings, i bathed him and then i found him a perfect little spot, one i had created only a few days before. i like to call them vignettes, my man has taken to calling them 'Tif's shrines' as in "ah, i see another shrine to your handcrafted and thrifty finds, has popped up whilst i turned my back". no matter. what matters is, i am thankful i was given a sign, so old Hubert can look forward to many happy days of 'intermingling' at mossy shed. 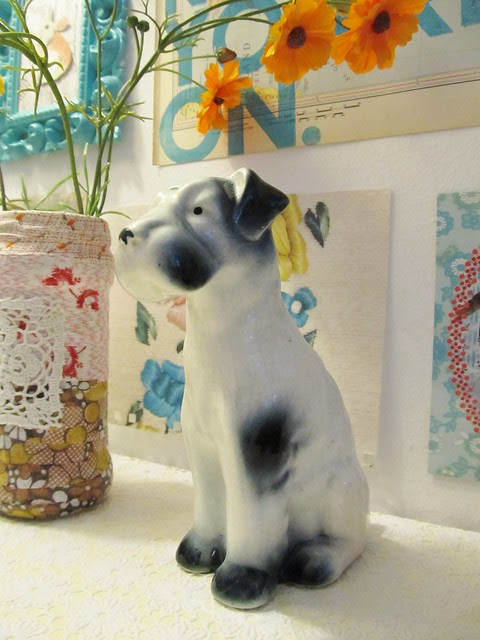 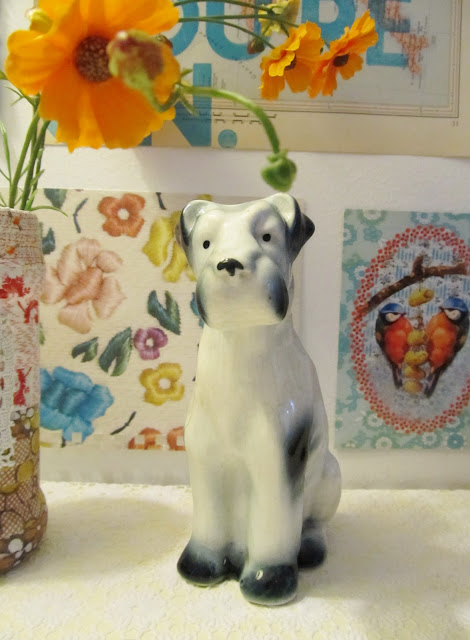 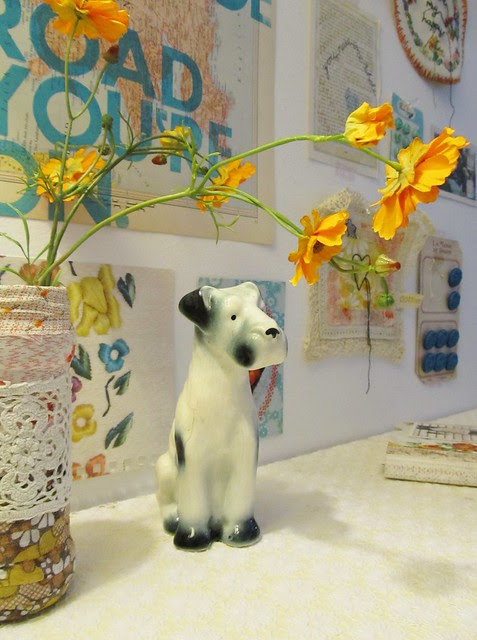 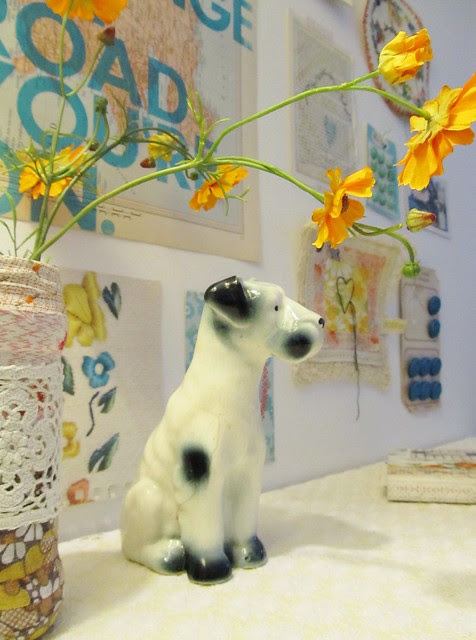 Email ThisBlogThis!Share to TwitterShare to FacebookShare to Pinterest
Labels: show and tell, thrifting

Oh, it makes me smile so much to think of him in his spiffy space that I feel moved to go and retrieve the bizarre blue lamb I have tucked away in a box and make it a space as well. He looks as if he cannot believe his good luck.

Good to see that Hubert has found a loving home.

Aww how cute he is! I love that you named him Hubert. :)

I think one must always follow thift omens...you never know where they lead. Herbert is stunning with a wash and some love. I have your new book and drag it everywhere with me. I do like pretty picures. Little olive in her bed curled as she once was in her mother is so charming. Herbert watches over things while pesky olive gets in to playing and used dog rests. The book is stunning and so much more than I expected. Thank you for the lovely job you and the publisher did. When I quit holding it all the time it will go to a special spot in the library. I am eating chocolate in honor of the beautiful forsaken soul. Cheers, Herbert
xoxo Helena

The more I see pictures of your book, the more I get the serious 'wanties'!!

I'm so looking forward to the launch of it my lovely, just so that I can buy it and quench my wanties at last :o)

I think it may be one that goes alongside my 'Little House' series next to my bed as my Bible :o)

I love Hubert :o)
And yes, I think 'dignified' is definitely in his job description.

Have a super duper day my friend.
xx

So adorable. I cannot resist sweet little creatures I find at the thrift stores or antique shops. They always have to come home with me and join their fellow rescues in my bookcase.

just found you via soulemama - guessed from your turn of phrase you were a brit straightaway - super to find an inspiring crafty blog by a fellow brit - I haven't found very many homeschooly crafty bloggers back here... will pop in again soon!

Oooh, Tif he is lovely!!

So pleased Hubert has found a loving home.

hubert is feeling most spiffy this afternoon after i have relayed your lovely words about him. i can tell by the expession in his eyes just how warmed he is...

Donna, you can find my book in my etsy store! i popped them in their yesterday :)

helena, so happy to hear my book is being taken around and about for a bit of dilly dallying, thank you kindly for the fabby book feedback :)

Hubert, you won't believe this but there was a Tif sighting. It was purely lovely and kept my heart a twittering all day. Happiness to you!

That is one adorable little dog but the whole thing together is such loveliness that it made me look up the word "loveliness" so I could get it just right!

Giggle, giggle, you make me laugh again Tif! Going to the thriftstore as we speek. Have a nice day.

Oh, he is a handsome one your Hubert. Have a fabulous time on Friday. Liz :)

Dear Tif and Dottie Angel, I just received your lovely book via my ever so helpful delivery man. I am in love with you both! Your imagination and ability to express it both with craft and the written word are fantabulous!!!! I have now given my vacuum cleaner a name, Miss Calli, in hopes of her feeling a bit more loved and spiffy while she is sucking up dog hair and dust bunnies!! Thank you for sharing yourselves with all of us!! I am so happy that Hubert found such a wonderful home.

Ah, so it's little Hubert, the brother of "Struppi" from "Tim & Struppi" in German (or the french original from "Tintin & Milou")!

I honestly have never commented on an ornament before, and I am surprising myself.

But.....I really love Hubert, he is so beautiful. I love his face, his very intense stare and alert eyes, and a his little black chubby chops each side of his nose. I mean it is his expression the likes of which I have never seen before.

I really mean it he make me smile a big smile. Hubert has such personality! I just know how you could love him.

little hubert reminds me of a certain little kitten i had inherited from my great grandmother, and i therefore believe he is probably at least 46 years old. she was just as cute as hubert. i loved her so, but alas, she broke and i think i had to "recycle" her, sadly. i am seeking her replacement to this day. <3

good morning and pleased to meet you Hubert!!!! you sure are a dignified handsome little gentleman and you do wash up very well!!!! i hope you enjoy your fabulous new home and i am sure you will bring tons of smiles as the family and friends pass by and say hi...your little cracks and wrinkles just add to your incredible personality and speak to all that meet you as they wonder where you spent the last 46 years...ah the stories you can tell!!! i do believe that you have been adopted for an eternity and will always be a part of this wonderful family. ENJOY my new friend and enjoy this new chapter of your life! hugs...andrea -- family and doxies (heaven and earth)

oh yes...forgot one thing...tell your mommy to keep on intermingling i think you need a brother or sister! never know when a new friend may share the shelf with you : ) always room for more i am sure! : ) hugs...

Hubert is gorgeous!
Excuse me, but do you know if I can buy your book in the UK please?
Buying one in dollars seems very scary for me!
x

oh my gosh, i just love to think you can see in Hubert what i can see... it just warms the heart for sure :)
thank you kindly for your most spiffy comments my dears!

a Tif sighting! oh how i love that :)

and Carol,
so delighted your hoover now has a name and you loved the book :)
Miss Calli is a fine and dandy name for sure...

the cottage market, thank you for the smiles this morning :)

One word for Hubert - dignified. No matter what life has thrown at him his paws are polished, his fur is washed, his eyes are steady and his character purposeful, a real old fashioned gent. Wasn't he lucky you went off to intermingle.
Carol xx

Hubert, I'm heading to the thrift store right now. Please send me some "peachy' vibes that I find more than just 'crappity crap'. Send me positive vibes that I might find a Hubert all my own! Good Boy!