it's blimen' freezing these days at the shed and so i am in full on nesting mode. i don't do well in tres cold weather nor do i do well in tres hot weather. which really isn't that interesting for you to know but i thought i would tell you any way.
my folks arrive from old blighty a week today and therefore, 'shifting' has been done to accommodate the extra bodies. 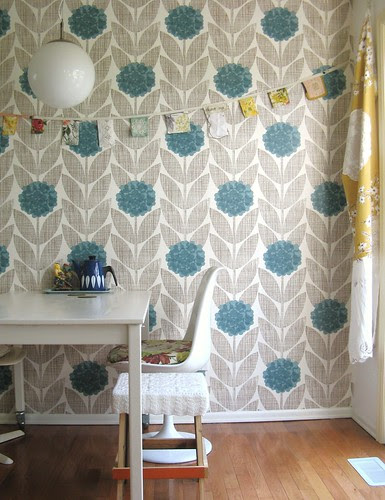 basically this means making my studio into another 'lounging' area, because really when it's christmas there is quite abit of 'lounging' to be done, preferable with Mr Hook in hand, in between all the festivities and gleefulness
thus, the sofa in the kitchen has done a shifty to under my studio window and my studio sewing table has done a shifty to the kitchen giving us a little extra eating corner, causing Miss Ethel to be most put out. i told her it was only for a little while but she isn't talking to me now...
as i was doing my 'change around' it occurred to me that we have been living in mossy shed near on two years and this one piece of wall, wallpapered the day after we moved in, has seen many 'a look'.
i thought it might be rather interesting,
(more interesting then my warm and cold issues above, but perhaps not as interesting as say a nice chocolate bar. an inbetweeny kind of 'interestingness' that passes the time of day)
to see just how much i have shifted things around in front of one piece of wall, since setting foot in mossy shed. and highlighting, that yes indeed i quite possibly need to get outside into the real world a bit more often... 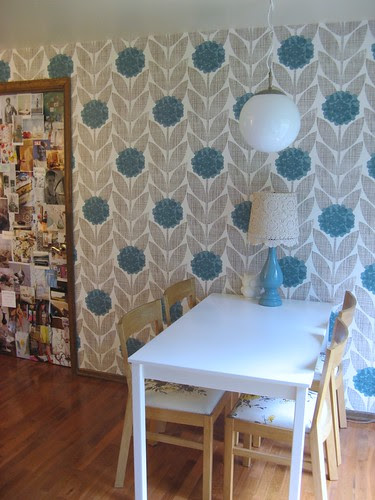 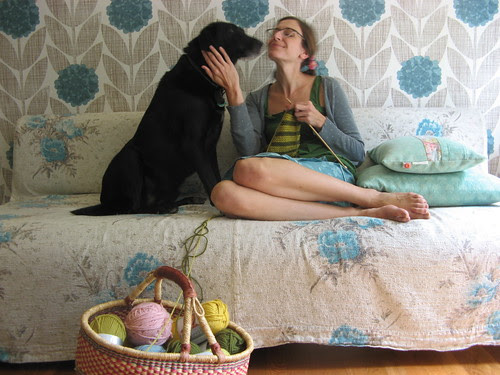 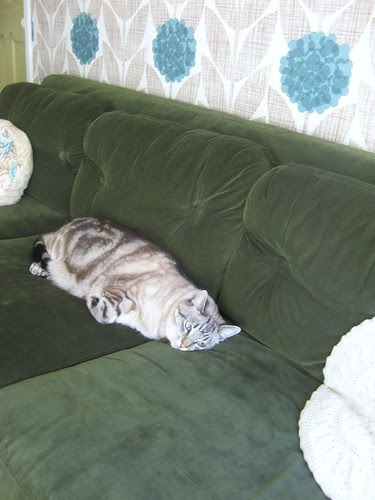 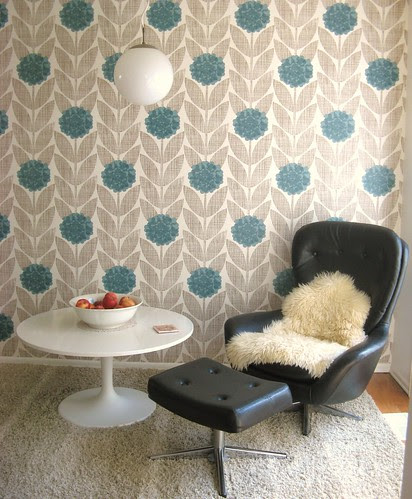 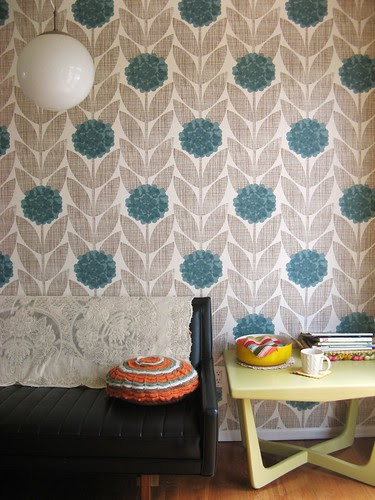 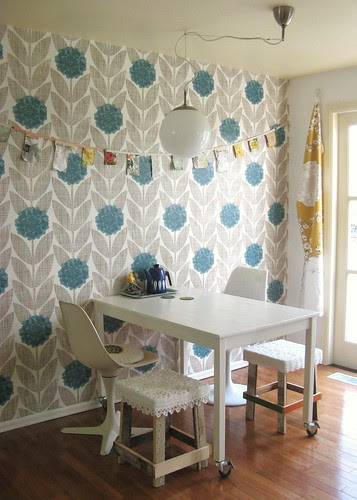 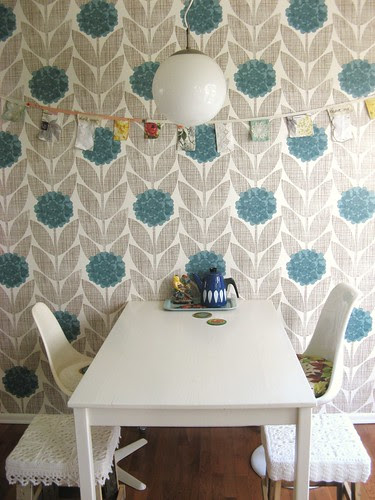 all ready to spend lazy holiday mornings over breakfast with my folks,
ha ha! i do live in a dream world, i can't remember the last time i had a lazy breakfast... however if i have a little area like this i am thinking it greatly heightens the chances of such an occurrence this gleeful season.
and just before you roll your eyes to the heavens dearest readers and exclaim,
"darn that Tif and her spickity span shed"
let me tell you dearest readers,
not two hours later and my lovely little space had been hijacked 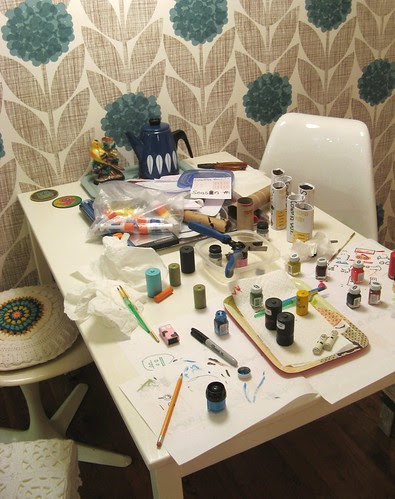 Email ThisBlogThis!Share to TwitterShare to FacebookShare to Pinterest
Labels: day to day life, life at mossy shed, show and tell

Oh I love your home! I am actually in the process of buying my first home with my fiance! And I actually said the other day lets make our home like Dottie Angels! lol :)

Love the metamorphosis of your shiftiness :)I would lounge for hours over coffee at your table!

Did you seriously wallpaper the day after you moved house?!! You truely are amazing and very very funny! I love your little nook in the kitchen too and think you deserve a few lazy breakfasts in the hols. Why not?

Hi Tif, I love,love, love your little tree, so beautiful!Just wondering, are both of your gorgeous stools from Wood and Wool?
Also I'm really enjoying taking part in your'Challenge of the Utmost Kind'I am finding it challenging at times,I'm fine if I don't leave the house! It's making me much more creative and that is the bit I love!I shall be blogging about it soon , I haven't managed to work out how to do the link to the challenge yet,I'll have to get Hubby to do it!
Rachel x

Dear Tif
It makes me realise how long I've been visiting your blog that I recognise so many of those furniture arrangements!
The wall paper continues to look delightful throughout!
D x

All the different layouts you've had for your room have been divine! I'm especially in love with that wallpaper! So beautiful.

What a great post, cute room and super multi-functioning wall!

I love your blog and the changes you have made to your space. I am constantly changing my living space as it is small but oh so beautiful.

Keep up the great work and making me smile.

Yes, it is freezing here in the Pacific Northwest and since I am a transplanted San Diego girl, this is quite overwhelming for me. However, it is a perfect time to curl up and get creative with old movies in the background. I think that is why there is such creativity up here with the cold and the rain. So many days to stay in and play!!! And thank goodness I have so many wonderful blogs like yours to read on such days.
Vickie in Seattle (well, actually Bothell) P.S. Love the tree!!!!!

sarah, i actually had a man wallpaper whilst me and my friend painted out the red brick fireplace to lovely white... nothing like hitting the ground running when one's been 'stifled' in the creative home department for years :)

and yes, they are little wood & wool stools and yes, my heart is in my mouth just watching my boys with their enamel paints so close to such 'loveliness'!!

wallpaper space pics are fun! a re-arrange is always refreshing. do hope you get that lazy breakfast....

chicken pic, however, is priceless.

Agneta, a swedish one

That wallpaper is GORGEOUS!!

You're making me want to redo the layout of my home!
I must say, though, I like the latest look. It is definitely lazy breakfast (and crafting) worthy! :)

I love how you are easily able to change things up all around your mossy shed. Looks great in all its many different phases. Best wishes, :) Tammy

Dear dottie,
did I call you dottie, I mean Tif :)
Your a changings in your beautiful "shed" are of great interest to me because I myself am a great pusher of furniture!! And having a feature wall as you do means so many possibilities for CHANGE!!
Oh dear what would we be if we couldn't change? What would our "nests" become?
And when my husband and different souls in this houshold start to whimper, I like to say to them that only stagnant water in a smelly pond does never see change but a mighty river or glorious seas do Move! And they Seem to understand??!!!
P.S I LOVE YOUR WOODEN STOOLS WITH LACEY TOPS!!!
Did you fabricate them?

You last picture is only just starting to look like my space...
Just times that by 5 at least...
I am hoping that when little miss is a bit older it will be tidier...
But that didn't happen with the others so I will not hold my breath...
Loving that wallpaper...

Your photos are always so pretty~

I agree with you about the not too hot and not too cold. When I say that people don't seem to understand ;)

Spickity span is no fun really,

have a lovely day,

ps. I've been following for a wee while and just wanted to pop on over and say hi - 'Hello!'

delightful home and have a beautiful holiday!

not perfect but nice!
brilliant, i love the thought of not being a 'stagnent pond', i shall save that one up and use it next time the clan bemoan my 'shifting'... which of course they did this time and then of course afterwards exclaimed how much better it was! typical!

and yes the little stools are lovely, they are from wood & wool stool and in the picture are wearing their winter coats :) a birthday and early chrimbo present from my lovely folks :)

Can you share the source of that wallpaper? I have an entry way to de-yawn.

wallpaper is by orla kiely :)

Love that covered stool. what a great idea. Will, must get to work on one. Recyclying at its best. Your blog, as always, enchanting.

Now the hi-jack is a comfort, I'll allow you the tidy moment so!

Wow. I was introduced to your blog via the sweet Amy at Sweet, Sweet Live. I adore your blog.

Is that you curled up on the sofa, knitting, and your dog keeping you company?

That photo portrays the exact cozy image I wish I could have.... except I'm shorter, rounder, and have curly blond hair but I do wear similar clothes to yours.

Wait..there's a point here. oh yeah - I want to live vicariously through you in your beautiful home with your pretty dog and your clan.

Cannot WAIT to explore the archives of your blog.