no more squeaks in the night (for now)...

i was wrong about it being a rat the wall...it was a mouse.
what possessed the little mousey to venture from the safety of his 'wall', out under the kitchen cabinets and into the waiting paws of a cat, i will never know. but he did and now he will no longer be gnawing on the shed. as i am rather fond of mice i felt rather sad...he looked just like 'our snoopy' accept a little more mangled. 'our snoopy' is still in his little pink box in the freezer, he moved with us and now we need to find a suitable spot for a pet cemetery, until that time he will stay in our freezer next to the peas. sad as it was to find 'mousey-no-name' dead on my floor, it is good to know that at least one of our cats will earn their keep living with us... 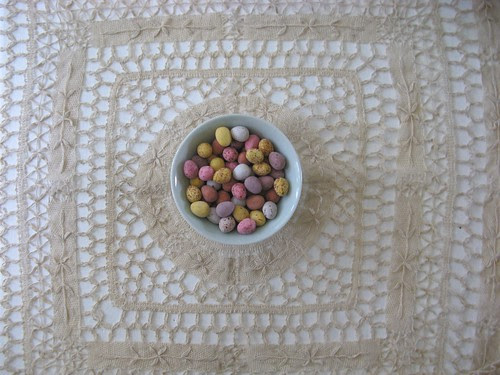 the roof will be finished by the end of the day...the kitchen drawers are in place and the crawl space man paid a visit and apparently "it's not too bad" down below. signs of 'moisture ants' and a 'bit of rot' but nothing that can't be sorted...(ha ha ha) 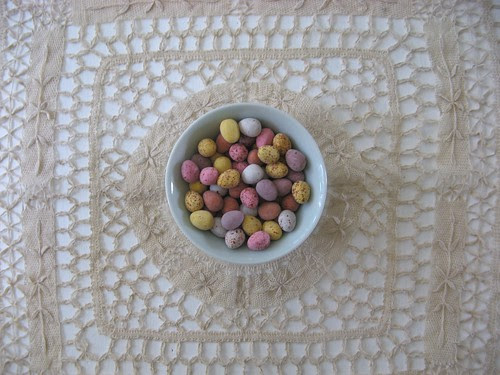 the kids were back to full day at school so i had a couple of hours to myself. i took a leaf out of Amy Butler's midwest modern book and put Miss Ethel to work making a slip cover for an ikea footstool that had a very grotty looking cover. i left the seams to fray and am quite happy with it... 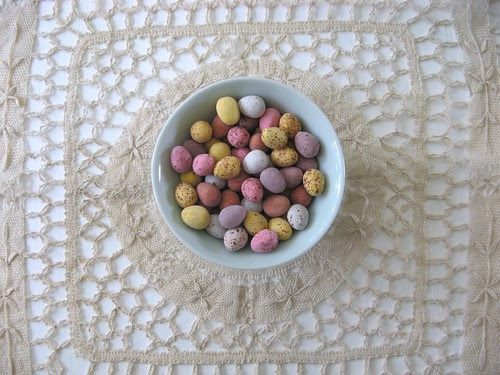 i have plans for working on Gladys's furniture. my man has told me i have to "make do and mend" with whatever furniture lurking in the garage that did not fit in Mossy Shed when we moved.
so it appears i will be having to do quite a bit of disguising kid's left over ikea furniture. of course it makes for some creative thinking and hopefully by the time i get done it will be hard to spot the 'ikea' under the 'customizing'...i have been thinking how nice it would be to wallpaper a bit of Gladys, (what's that? no, no...on the inside, i'm not that mad) but i have visions of it just peeling off at the first sign of 'damp'... 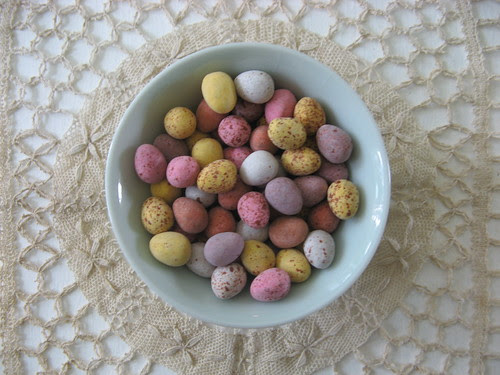 used dog has refused point blank to eat out of her new 'used bowl'...she has had the same plastic bowl for eight years and i decided it was time for a change. she however has decided it isn't...i have changed everything in her life when we moved in January, everything accept her dog collar and her bowl. she tells me enough is enough...she doesn't care that the new 'used bowl' suits my kitchen so much better than the plastic one, she would rather go hungry then eat out of it...she never complains about life so i think i have to take notice of this 'hunger strike' and reinstate the plastic bowl... 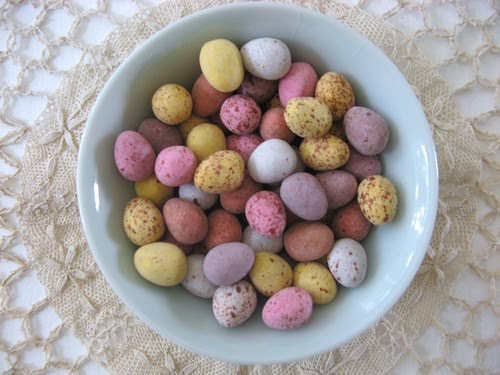 What were you thinking? The treasured bowl changed! This remodel has gotten out of hand.

Thank you for the laugh. Our cats are not sure about the new chairs in the den,even though we kept their favorite. Then mom went and moved things around without asking what they thought. The looks I have gotten speak loudly.I wonder who is in charge here?Nancy A.

I hope there's a way around it, because I have visions of wallpapering a trailer of my own someday!

I like your idea for Used Dog's dish. Too bad she's objecting.

Cadbury Eggs! They're my all-time favorite candy. Although, by the colors, I'm assuming they're dark chocolate...? Mine are much lighter, I'm a milk chocolate fan through and through.

Happy Easter to you and your family Tif! {And, thank you for your thoughtful email! So nice of you.}

I am glad the mouse is dead - cute they may be but they pee and poo over everything they don't nibble. Well done pussy whichever one it was.
Since having my last rodent visitor I bought a plug in sonic rodent repeller and I have to say it was the best £30 I've spent in a long time.....
Make do and mend is the best way to tap into creativity....and your man is obviously giving you permission to doilify Gladys:)
Happy Easter to all at Mossy Shed.

dear, used dog, i think you are wonderful. it is all so hard to move. it is good when some dear soul, brings all back to reality. i just want my good ole bowl, nothing fancy here. but, mom, love what you are doing with the rest of the place. a nice big square like cushion on the floor, right here where you work would be so nice. in one of your great ole patterns, that you find. if it were a slip cover than you could pull it off when you like & wash it. you will be so happy.

Happy Easter Tif. It is so inspirational to see how your new home is shaping up.I'm off to make hot cross buns ( a day late).

All old homes have mice sooner or later. I've lived through a few episodes in the 5 years we've been in our house. I can't beleive I've never spotted any evidence at our shop - 100 year old warehouses are not well known for their vermin free environments - knock on wood. Anyhow! Happy Easter! I love your blog (you're in my blogs to be inspired by link!) Keep blogging!