apparently last week was national crochet week! i did not know this, but now i do, i also did not know what nation, as i recall it said 'national' and not 'international'. after some thoughtful moments i declared to myself, such trifling details do not matter, what matters somewhere out there was a terribly thrilling week long event of crocheting and all its goodness.

"pray why were you crocheting Tif?" you ask. goodness, that is a brilliant question and one most worthy of a ramble...

on the 26th of December Our #1 turned 21! home to celebrate it from across the pond she exclaimed she would like to go out for a grand thrifty pottle to celebrate. as her mother it was my duty to grant this birthday wish and i insisted upon accompanying her so she did not get lost. several forgotten souls were found that day, including one which made my heart go pitter patter. it was as though it knew i would come for it.
for several weeks earlier i had made the decision to take down my 'bits and bobs' wall in our entrance way come the new shiny year and put up a coat hook. "but what coat hook?" i asked myself weeks before. in my head i plotted lavish plans of old wood with a multi delight of different hooks and knobs, i could see it clearly, right there, in the space in my cogs i reserve for 'visualizing'. tis a place filled to the brim of images, floating around, crowding in on each other, things i hope one day will see the light of day.
however on the 26th of December the coat hook on the shelf of despair, standing before me, put to rest my 'handy hook' visualized image in my cogs

how could it be, in all the years of seeing old expandable peg rails on my thrifty travels, none as sweet as this one had found me. i have no doubt, the coat of perfect green, a little bit worn and a simple naive white painted floral detail sealed its fate to come home and live on our hallway wall. 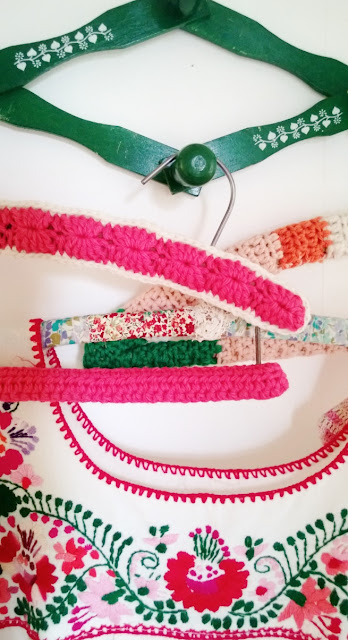 the fresh shiny new year arrived, with it my girls packed their bags and headed many miles across land and sea to their homes and i was left with an ache. an ache i know too well and one i dull by pottling and shuffling around the shed. down came the 'bits and bobs' and out came the handy dandy coat hook. i decided to request my man's muscles for the job, i like to think it makes him feel needed in life, i am quite sure he thinks otherwise. i pointed to the naked wall, revealed my lovely coat hook along with its friend 'mr yellow' hook, and waited for a small gasp and hushed tones of wonder at the peg hook and his coat of fabby green. instead my man responded with, (taking 'mr green' in  hand and looking at his wobbly bits with the eyes of a sceptic) "would this be a useful coat hook Tif, one that actually has a purpose to it, or is this just another way of displaying things which make you happy?". i looked at him and smiled, pointing to the dull ache in my chest, no words needed
"just as i thought" he said "i don't know why i bothered to ask" 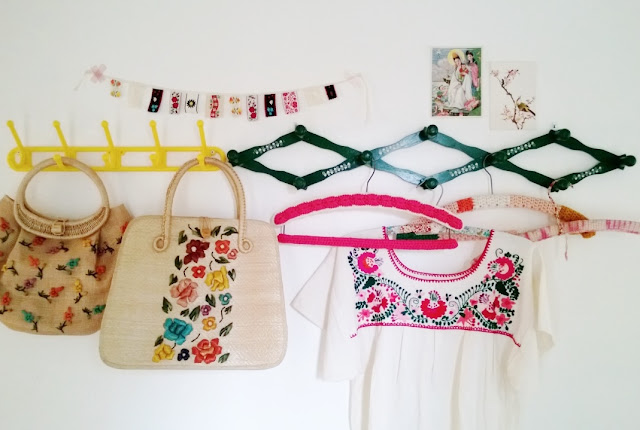 and so, rolling on to last week, coat hook doing his thing of looking peachy i decided some crocheting of an old wooden hanger in pink needed to be immediately attended to. thus making 'mr green' feel welcome and even better still, it was done on national crochet week in retrospect. and that little piece of knowledge has done wonders at warming my crafty soul...
Posted by dottie angel