a little giddy or what...

for a moment i was distracted by a large (extremely large, as in life size) chalk-ware forsaken soul cat. i was strangely attracted to its slightly evil eyes and pondered as to whether it would like to live in Gladys. i pushed the evil eyed cat to the back of the shelve so others may pass on by and went upon my way, thinking i would swing on back again later. and so i pottled quite happily amongst the shelves of despair. i noted rather a large gathering of thrifters were going about their business. i did the usual once up and down the shoe aisle in-case a pair of clogs were looking for me and as usual, they weren't. haven't found me in over 2 years thats how scarce a pair of secondhand peachy clogs can be. thought i would have a mosey at the boots, once again,  a rarity to find any of worth. as i was just about to turn away i noted a tiny wooden tip of a 'cloggy soul' sticking out, hanging behind another pair of unloved soles.

i gulped, i noted a thrifter close by, too close for comfort and right in front of what i believed could be the cloggy find of the century. my heart quickened, i had not choice but to lean in front of her saying "pardon my reach" (a term learnt in a pizza restaurant when the server kept on saying it every time he put something on our table and now adopted by us for certain circumstances such as this moment). as i lent forward and touched the buttery soft leather i gasped. not out loud of course, no sirree that would never do, i kept it inside due to not wishing to draw attention to my find just yet. i fell instantly head over heels in love, that moment for sure, a chorus of angels appeared. could it be they were in my size, surely surely if ever a pair of cloggy boots were meant to be. as i placed my foot inside the boot i knew at that moment how Cinderella felt. i was going to go to the ball after all, i was going to do a cloggy dance the likes of which have never been seen before.

i finished up my pottle with an intense filling of giddiness which had left me so full of joy i wished to cry. i told myself to get a grip Tif, really get a grip. i could not believe others were not overcome too by my find but they were not, they were intent on finding their own bit of secondhand joy.

so i took 'my find' home, to share with my lads of three (oh such lucky lads). i will give my man his dues, indeed i will, for he tried really hard to understand the monumental-ness of this peachy find. i noted to him, despite the soft worn in look of the uppers, the unders had not been worn thus my expertise tells me, they are nearly new.

since bringing home my cloggy boots i have done what i always do with any fabby find, i have placed it where i can see it and admire it at all times. i have done this for donkeys years.

alas and alack though, i left the thrift store looking like a cat who got the cream but i did not have an evil eyed cat by my side... my thoughts are, if he's still there next time, then he is meant to be my evil eyed cat

if you are still there? "hello hello". this is well worth a bit of giddy. i would say a cup and a half of giddy to me. earlier in the year my path crossed with the lovely Jennette and in doing so, we struck up a most grand friendship and one i am so chuffed to have. Jennette is quite the curator of curiosities and she has an emporium filled to the rafters with vintage finds so beautifully displayed i could spend all day just looking. well on saturday lucky old me is getting to do just that. i will be there the 'whole live long day' from 12 to 6 working behind the counter! i cannot believe this position of high responsibility has been given to me. i am overcome with giddiness mixed with nervousness at working out in the world again. tomorrow i will bring you some peachy photos of Jennette's fine emporium Smashing Rubbish, in the meantime you can find out where her store is by visiting this spiffy facebook page for the nitty gritty.

weather bug has informed me it will be tres hot, but this will not deter me from wearing my fine new fabby cloggy friends along with a home made frock to bring me good luck, and it is my hope you may care to pottle my way and come and spend a few happy moments browsing the smashing shelves of Jennette's fine emporium. i promise to do my utmost best at being very knowledgeable about things for sale and chit chatting if you so wish. however i should add a little side note to my invitation, you will wish to bring your piggy bank along too, for its near on impossible to cross the threshold to Smashing Rubbish without parting with a few pennies.

photos tomorrow of Smashing Rubbish delights, later on, after i have had my 'shop training' where i will be wearing a badge which says 'in training with lovely clog boots on feet, please be nice'

Tif :)
footynote: i have told little olive it is way too hot today to play hide and seek... after counting to 23 and a half, she fell asleep 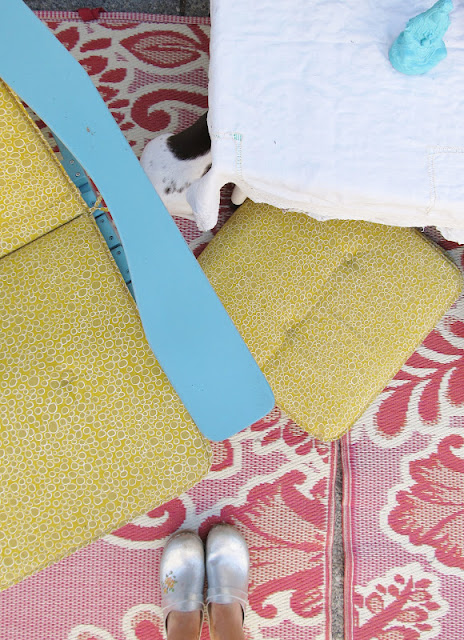 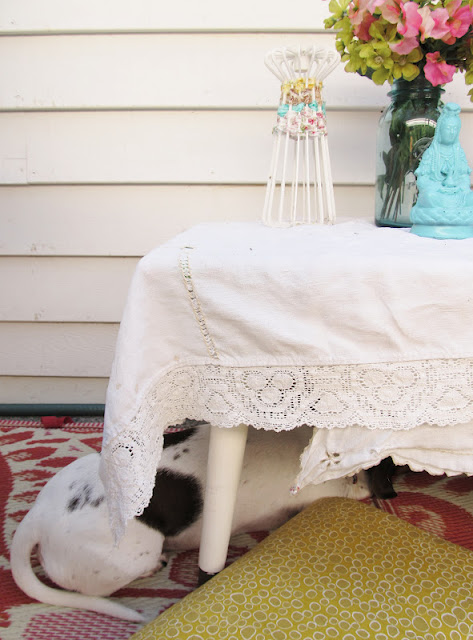