discoveries of the utmost kind...

i love a day when a discovery is made,
a discovery of minute proportions in comparison
to many in the world,
but one which changes something within your own.
i would not say my discovery is worthy of calling our local paper,
nor climbing upon our roof to shout for all to hear.
however i do marvel at its discovery
for once again i am left,
upon discovery of my discovered thing,
marveling how something you have had all along,
can upon one moment of 'ah ha'
become of use.
last week,
upon wrestling my growing braids into place
upon my bonce.
i noted as always the front looked done,
and the back did not.
i noted this is because in fact, i had done the front
and as always, neglected the back.
after 2 nights sleep,
the neglect was even more in evidence.
to tame the matted back and highlight the smooth front
i rustled around in my scarf collection.
but just as i had thought before my rustling began,
all scarves in my possession just would not suit.
and so as one does,
i thought of ties, and when one thinks of ties
one thinks of apron strings
and without further ado,
this very thought led to some careful snippity snipping.
after keeping waistband and ties intact
i had myself a natty bit of vintage string
to adorn and control the growing nest upon my head. 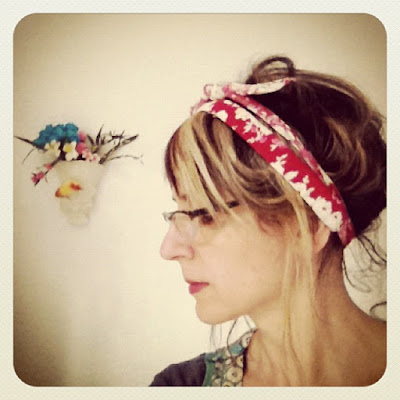 such was my delight, upon seeing it from Ivor's point of view
several more half aprons 'volunteered up' for the chop.
they did not fret nor fear
their bodies would be left discarded and unloved.
for i told them of my crafty plans...
Tif
Posted by dottie angel

Great recycling, a real 'vintage' look, you are now peachy perfectly attired to black your grate and scrub your front step.
Carol xx

A perfect solution to bird's nest hair...silk scarves are too slippery I find...thank you for sharing this utmost discovery!

This amused me greatly, As I too have 'Birdnest hair!' TY x

Is'nt recycling fun, and when you find that 3rd life for something it's just so very satisfying :)I just reporposed a holy jumper into a scarf and so delighted with it I posted it on my blog so that other jumpers might be saved and re-loved.

Gorgeous post! I am in love with the cushion x

Oh what a cute new do!

I like your hairdo and the hair ties! Fun fun!! I just did a post on making a cedar bark basket yesterday at the craft school.. I'm so pleased! And while I was there the spinning teacher gave me 2 huge bag of raw Alpaca. Oh boy I have my work cut out for me!
((hugs)), Teresa :-)

Totally awe inspiring peachy gal;))))
Just wish mine would hurry up and grow:(((
Until then my 'do' will remain pink!
Best wishes
Issyx

you are such a delight to read and know. this is just pure happy. yep. pure happy. i love your apron nest hair and goodies of glee.

I give you an award because i love your blog!

One can never have too many scarves, nor scraps of fabric to wrap around one's head.

You can totally pull off the messy updo. Lovely!

That is indeed a prefectly peachy cushion! Some very nifty re-using of stuff x

I love what you did with the aprons! The cushion is beautiful. It is always great when you can discover a new way to bring beauty to already wonderful item. So creative, Tif! :)

oh thank you dearies! thank you most kindly indeed :)

WISH I looked that good with an adorable apron tie around my head!...you are rockin the nest for sure!
more bardot than birdie!

This is a good idea for those apron strings that are too short for my waist! Apron strings belong to be long to wrap around and tie in a bow in front.

how beautiful stated, thank you for sharing this utmost discovery! looking forward to all the good things your blog shares

ALWAYS a good look even when used to cover up when you haven't bothered to wash your locks.

Tif, there was no option to post a comment at your newest post, the one following this one about your sabbatical. I just wanted to say that your posts will be missed but, having just recently discovered your blog, I will take the time to read and look at your older posts.

I wish you all the best in spending time with your family, growing, and resting your wonderful imagination.

Hope you enjoy regrouping without the distractions of the PC kind, and find plenty more time for fresh ideas and precious family - shall miss popping in.

Dear Tiff,
I hope that you blossom into spring. And these just might make you smile. I purchased them recently for summer happiness.http://www.ebay.com/itm/250871400625?ssPageName=STRK:MEWNX:IT&_trksid=p3984.m1497.l2649. Take care.
Traci